A few weeks ago I sought the web page for the NY Public Library, checking to see about opening hours for this magnificent building. What greeted me was a display of various books that had been banned or censored over the years, most of which were well known to me as an avid reader. What I didn’t know was that the last week in September is Banned Books Week, “Celebrating the Freedom to Read.” I wondered whether the freedom to read coexists with the freedom to write?

The Puritans, of course, were masters of telling folks what they could and could not read and write. The first known banned book in America was Thomas Morton’s New English Canaan published in 1637. It encouraged readers to love Native Americans and satirized the Puritans. In the eighteenth century, while America still strained under the yoke of Britain, Defoe’s Moll Flanders and Roxana: the Fortunate Mistress, as well as the perhaps more infamous 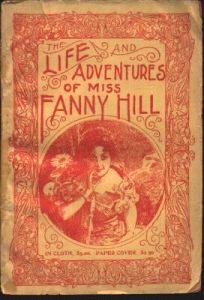 Fanny Hill by John Cleland, met the censor’s ax. Fanny Hill bears the dubious distinction of being the last book to be banned throughout the USA. While the dime novels of the nineteenth century may have caused an outrage or two, increased literacy, and hence literary output, seems to have led to an accepted form of censorship. Expurgation and the accompanying bowdlerization of numerous books was acknowledged as protecting public virtue and decency. Even Shakespeare did not elude cuts. Perhaps the most famous of nineteenth century banned books is The Adventures of Huckleberry Finn. Still coming in at number fourteen in 2009, Huck Finn has been repeatedly challenged from all sides of the spectrum.

Originally banned as immoral and sacrilegious, not to mention having a lack of respect for adult authority, as time has passed, the baton was dispatched to others, so to speak. In the 1950s, the NAACP began challenging the book as racist because of its portrayal of the slave Jim and the repeated use of racially pejorative terms, namely the N—– word—a conflict that has repeatedly harassed To Kill A Mockingbird as well. During his lifetime, Twain aka Samuel Clemens, simply saw the controversies surrounding his book as excellent fodder for promotion. He knew publicity when he saw it. Harriet Beecher Stowe’s Uncle Tom’s Cabin is occasionally credited with having started the Civil War but, although it may have been difficult to purchase in southern states, it was never officially banned. I’m sure Congress might have liked to ban Helen Hunt Jackson’s A Century of Dishonor as well as Ramona, both of which deal with the treatment of Native Americans, especially by the federal government, but that didn’t happen either.

However, in the twentieth century, guardians of public morality became rife. Almost everything Theodore Dreiser wrote was either challenged or banned: Sister Carrie, Genius, and An American Tragedy were all held in check by the New York Society for the Suppression of Vice, The Western Society for the Prevention of Vice, and the Boston District Attorney. But it was James Joyce’s

Ulysses, considered by many one of the great masterpieces of modern literature, that really brought up a host of questions as to what is acceptable as freedom of speech and what is not: what has literary merit and what is pornographic? It is a question that bears heavily on free speech, under the jurisdiction of individual states, the federal government only being able to intervene when items are passed between states. The federal government passed an obscenity law in 1873 when the Supreme Court decided that pornography/obscenity was not protected by the First Amendment, yet this still leaves the question open as to what is obscene. The toing and froing over Ulysses took some fifteen years internationally to finally be settled in a NY court of law when it was decided that Joyce’s purpose, despite several sexually explicit scenes, was not pornographic. I can only wonder if E.L. James can truly stand up to such a test. Oh, but I forget: today we have ‘erotic’ literature…

The other famous court case of the twentieth century was, of course, Lady Chatterly’s Lover. I can well remember the girlish giggles accompanying “discussion” of who had a copy of the book and where we might gather to read passages away from the prying eyes of teachers and parents. Chatterly and Tropic of Cancer, of course. Chatterly had been banned for both its coarse language and explicit scenes of a sexual nature, but in 1959 the ban of this, along with Fanny Hill and Tropic of Cancer, was overturned when the court found it had literary merit. As an aside, let me say that the case was then taken up in the UK the following year, where the judge asked the famous question, “would you want your wife and servants to read this book?” After three hours of deliberation in Her Majesty’s Court, the answer was, “yes.”

Nowadays, the predominant challenge to books is that they are unsuitable for their age group, having too much violence, too much sex for their age group, containing controversial issues, offensive language, promoting homosexuality, containing drugs/alcohol/smoking/gambling, being socially offensive, containing nudity, and just about any other ‘vice’ you can think of. Heading the list this year was The Absolutely True Diary of a Part-Time Indian, by Sherman Alexie, which work contains “cultural insensitivity” and “depictions of bullying.” The 2009 list, which is the last year for which I can find a full top 100, contains some titles with which most of us are familiar: the Harry Potter series, Of Mice and Men, I Know Why the Caged Bird Sings, The Color Purple, Catcher in the Rye, To Kill A Mockingbird, Snow Falling on Cedars, One Flew Over the Cuckoo’s Nest, The Kite Runner and, yes, Huck Finn is still there. Yet looking at the current list, most of the challenges are by parents who deem certain books as not appropriate for the age for which they were intended. And Tango Makes Three, a true story about same-sex penguins who were given an egg to raise after building a nest together and trying to raise a ‘rock’, has been challenged numerous times as promoting homosexuality. I wonder if the author ever thought twice about not writing this incredible story?

So I go back to my original question: is freedom of speech, and the freedom to read, the same as the freedom to write? With laws defining “hate crimes” as well as obscenity/pornography, are authors free to write as they wish? Are we bound by decency? If we write historical novels, do we think twice about using the N—– word or other racial slurs common to the time period we are depicting? Do we dampen down our scenes of an intimate nature or avoid them altogether simply because we are afraid of parental/friend/spouse/church condemnation? And while my magnificent NY Public Library most likely does not wish to purchase my western historical romances on grounds that they are irrelevant for their reading audiences, how does this decision not to purchase equate with banning books via not purchasing them for the libraries.

Let me know what you think.

For further information regarding this topic, the following sites are helpful:

24 responses to “SO YOU THINK WE HAVE FREEDOM OF SPEECH?”