Driving into Memphis, we had intended to visit a museum called Slave Haven, once a stop on the underground railway. As we passed boarded-up houses and other signs of a general lack of care, a certain nervousness about leaving our car, full of seven weeks of luggage including computers, overcame my general desire to pursue history on this occasion. Pulling up to the museum, a house in condition commensurate with the neighborhood, we found that a prayer meeting was taking place on the lawn. Sometimes decisions are made for you… 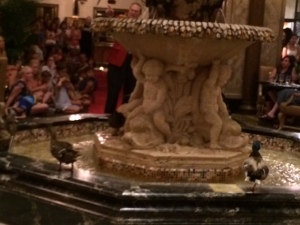 The ducks before their march in the Peabody Fountain

So, on to the Peabody Hotel where our check-in was slightly earlier than the bi-daily march of the ducks to and from the lobby fountain. A Vodka Collins helped us pass the time and deal with the crowd, many of whom specially bussed in for the event. There was standing room only, including on the upper level overlooking the lobby. Finally, the so-called duck master went into his spiel, which lasted some ten minutes, and then herded the ducks towards the elevators to take them to their penthouse suite. In single file, the ducks marched off down the red carpet—pretty well hidden from sight except from the children who had been seated either side of the walkway.

My attempt to get a photo of the ducks marching

In England, there’s an expression of dismay: “Lord love a duck!” I don’t. Except on my dinner plate, of course.

This entry was posted in Uncategorized and tagged MEMPHIS, PEABODY HOTEL, SLAVE HAVEN. Bookmark the permalink.

6 responses to “LORD LOVE A DUCK”