A TRIP DOWN MEMORY ROAD 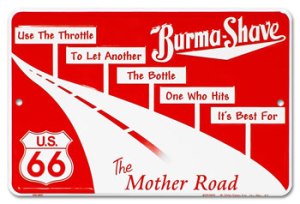 nowadays, I think ‘Road Trip.’ While I’ve recently lost my main travel partner, my daughter, to marriage, I can speculate that some time in the hopefully not too distant future, I might be relegated to a back seat, overseeing child or children, while husband and wife share driving to some enchanting site I’ve longed to see.

Road trips for me were initiated when I was still very young, way back in the ’Fifties. My family took off every Christmas-time to Florida in order to be with my great-aunts and their families who had moved down from NYC. Since my grandmother was one of eleven children, there were quite a few of these great aunts along with offspring, a giant family my own daughter has sadly been denied. The trip down took three days in a car that insisted on getting a perennial flat tire. We would pull off the road and my father would bravely remove jack and spare from the trunk but inevitably someone would stop to help us—for which we all sent up prayers of thanks. My father would always try to ‘tip’ the savior and sometimes it was pocketed with thanks, sometimes rejected, but it didn’t matter—we were off! Other years, the radiator overheated, another persistent problem in those days, and it often saw us sitting by the side of the road, a plume of steam like a genie from a bottle coming from the raised hood. One time we were able to pull into a diner. Believe it or not, my father went in to ask for water for the radiator and the waitress refused to give it to him. We were down south at that point and I think she just had a ‘thing’ against northerners perhaps. Another, more kind-hearted waitress came rushing out with a pitcher for us.

Yet another foible of road travel in my youth was car sickness, from which I suffered often. I would moan from the back, my father would pull over and I would throw up out the door. Okay, so this is not a pretty picture—apologies. But once my dad pulled onto the soft shoulder—which were rampant in the days before freeways—and my mother slammed the back door shut without looking, screaming for him to pull off. She caught my finger. Skin and bone were sticking out and it remains crooked to this day.

The traditions of that trip south stay with me. Burma shave signs lined the road at frequent intervals. Burma shave was a brushless shaving cream, and their advertising was a series of signs along the road with what would now be considered advertising ‘jingles’, or alternatively common sense warnings about driving or, apparently, some political propaganda during WWII. Keep well / To the right / Of the oncoming car / Get your close shaves / From the half pound jar/ Burma Shave. That bearded devil/ Is forced/ To dwell/ In the only place/ Where they don’t sell/ Burma Shave. Cattle crossing/ Means go slow/ That old bull/ Is some/ cow’s beau/ Burma Shave. Apparently, John McCain’s camp tried using the same promotion strategy with slogans against Obama without success.

Another tradition was stopping at Howard Johnson’s on the highway for lunch.

I always ended my meal with their ice cream cake roll—vanilla ice cream in a swirl of chocolate cake topped by hot fudge sauce. I can almost taste it now. And I long for the candies at Stuckey’s. Known for their pecan chocolates, my family gravitated toward chocolate covered cherries and chocolate covered flavored marshmallows. I’ve never been able to find these anywhere else and yet I can envisage them in their square shape as if it were yesterday. Now some of Stuckey’s items are available on line, but the chocolate covered marshmallows are not among the offerings.

When we reached the South the scenery changed markedly. Our motel would always be the highly kitsch ‘South of the Border’ in 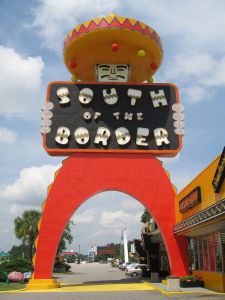 South Carolina. A complex which now encompasses two gas stations, a pharmacy, shops, and so on, even back in the fifties and early sixties it was huge. I left our room one night to get a candy bar from the dispenser and couldn’t find the room. I wandered for ages before finally, somehow (and at this stage I don’t remember how!) locating it. The motel’s Mexican theme remains today, and for those seeking a ’50s/ ’60s travel experience, this is the place.

At last there was Florida. Florida is a long state so there are many miles before you get down to the Hollywood/ Miami area. But you would always know when you were in Florida as alligator wrestling signs lined the road; oranges were readily available from farm stands along with a little plastic mini-straw you stuck into the fruit to suck out the juice; coconut patties were for sale everywhere; and Seminoles were selling coconuts carved into Indian heads, painted, and decorated with shells and so on. I once got into trouble with my parents when a

stand across the highway from where we had stopped attracted my attention. A rainbow display of colorful feathers drew me over and I thoughtlessly crossed the two lanes.

Of course, that was it: you could walk across the one-lane highway just as you would cross a street now. The roads were slower, there was more to see. The signs and rest stops were varied. A friend recently said to me that road trips were SO different back then. And they were. We had no superhighways, no five lane major Interstates, no traffic-laden freeways. Life was slower; life was gentler. Route 66 was still the ‘Mother Road’ and Route 1 still drew travellers down from the northeast to, as yet, hardly developed Florida. On my 2015 seven week road trip with my daughter, it was obvious that lunch meant leaving the highway, and that signs were advertising places at specific exits. In the early ’Sixties, three-day drives to Florida were replaced all too soon by a four hour flight. Americans seem to want ‘fast’ now: fast roads, fast food, and an information superhighway.

There is still the call of the Open Road, that glorious moment when the door clunks shut, the seat belt snaps down, and you know you’re headed somewhere new and exciting, but the road itself has lost its mystique in most places. Yet in others, that straight line where the sky meets the earth, that destination of horizon, still holds its aura of endless possibility.

Even if there’s no hot fudge sundae en route.

19 responses to “A TRIP DOWN MEMORY ROAD”