I met Steven Kohlhagen through the American Westerns group of Goodreads. Steve kindly complimented me on the article I had written regarding posterity and memoirs, one of which was Buffalo Bill Cody’s Story of the West.  Steve’s latest book, Where They Bury You,

partially concerns Kit Carson, and Carson was one of the men Cody had memorialized.  Carson’s scorched earth policy, used to remove the Navajo from their homeland, is something that, today, denigrates the man’s other accomplishments as a frontiersman.  Yet, Cody claimed that the policy had actually saved lives. I therefore approached Steve to find out what his own research had uncovered.

Kohlhagen is a former economics professor at the University of California, Berkeley, a former Wall Street investment banker, and is on several corporate boards, most notably that of Freddie Mac. He is the author of numerous economics publications as well as co-author of a murder mystery, Tiger Found, with his wife, Gale.

The Kohlhagens divide their time between homes in the San Juan Mountains on the New Mexico-Colorado border and Charleston, South Carolina.

At that time Kit Carson was a bona fide American hero. It’s right there in Herman Melville’s Moby Dick: frontiersman, mountain man, Indian fighter. He was also a hero of the Mexican-American War, “Father Kit” to the Ute and Apache Indians on his Agency, fictional hero-savior to any number of innocent women and children in distress in the 19th Century “Blood and Thunder” dime novels, and loving Taos father and husband to, over time, two Indian wives.

On the other hand, the Navajo Indians—the Dine—were friendless throughoutthe West. Ill-treated by the Spaniards in the preceding centuries, the Navajos discriminated against no one in robbing, pillaging, murdering, and enslaving women and children. The Dine succeeded in the seemingly impossible: uniting Whites, New Mexicans, Pueblo Indians, Cheyenne, Utes, Mexicans, and all manner of Apache tribes in their hatred and fear of marauding Navajo warriors. Even the Navajo headsmen, when confronted with the opportunity to bring peace, admitted that it was beyond their power to stop their young men from raiding. They essentially responded to attempts by the U.S. Army to enlist their support with the 19th Century equivalent of “Kids today!”

What about 2014? The general view of the Navajo today is one of a venerable, peaceful Native American culture. A spiritual nation inhabiting their Reservation on their native lands in northern Arizona. A people that, to this day, largely view Kit Carson as a genocidal murderer of innocent Navajo.

And, if asked to name great American frontiersman, very few Americans get to Kit Carson’s name.

What happened during the intervening 150 years to bring about this 180-degree switch?

My first introduction to the legend of Kit Carson was by a young Navajo guide on a private tour of Canyon de Chelly. He took me to a medium-high, cylindrical hill covered with brush and small trees deep in the canyon and said, “That’s where Kit Carson brought the Navajo women, children, and elderly and massacred them.” Years later, a friend told me of his tour of the Canyon and the story he’d been told of the massacre there by the Spaniards centuries before Kit Carson. And then I read Hampton Sides wonderful Blood and Thunder. That book launched me into research into the history of the Southwest. A passage in it inspired me to write my own novel, Where They Bury You, a murder mystery based on the actual 1863 murder of Joseph Cummings, U.S. Marshal of Santa Fe and Army Major reporting to Carson.

Six or seven generations of Navajo oral history about the horrible 1860’s “Long Walk” to Bosque Redondo has left many, if not the majority, of living Navajo believing that Carson was responsible.

The truth is that Bosque Redondo was the misguided vision and policy of one General James Henry Carleton, head of the Union Army in the Territories. When the Civil War battles ended in the New Mexico and Arizona Territories in 1862, the Navajo and Mescalero Apaches continued raiding and killing, and in the case of the Navajo, enslaving the local New Mexican people. Carleton decided the only answer was to round them up and deport them to Bosque Redondo, a totally inappropriate section of land along the Pecos River in eastern New Mexico.

Carson objected to the policy as untenable and tried to retire to his family and his Ute and Jicarilla Apache Agency. But Carleton insisted that the famous frontiersman carry out this last patriotic duty.

First, Carson induced the Mescalero to surrender and delivered them to Bosque Redondo.

The Navajo turned out to be a bigger challenge. They simply vanished into the deserts and canyons of their homeland. Carson, frustrated by his inability to find the Navajo and their previous refusals to stop raiding and killing the other neighboring tribes and New Mexicans, implemented a scorched earth policy throughout the Dine homeland. It took nine months, but the Navajo people began trickling in and surrendering. Some deaths obviously may have occurred due to the conditions in which the Navajo were then forced to try to survive, but there was never any massacre per se.  In fact, Carson, objecting to the 9,000 person four hundred mile walk without adequate support, returned home to Taos for several months. He then insisted on being the Indian Agent at Bosque Redondo in a failed attempt to help the Navajo adjust to their new home.

Bosque Redondo was a colossal failure. The Mescalero just up and left one night in 1865 to return to what continues to be their home near Ruidoso, New Mexico. The Navajo negotiated their departure and walked the four hundred miles back home in June 1868, one month after the 55 year old Carson died in Taos.

At the time, General Carleton was blamed for the failure and returned to his Texas home to die in relative obscurity in 1878. The Navajo, though, have never stopped blaming Carson for their hardships and deaths. Today, the Navajo story and memory of Carson’s culpability resonates better in the public American culture, while the numerous Navajo depredations and Carleton’s miserable failure have long faded into history. In contrast to modern New Mexicans, some modern Native American tribes still do retain a cultural memory of the negative Navajo history.

Justifiable or not, reaction to the Navajo oral tradition had caused Carson to lose his chance to be remembered alongside Davy Crockett and Buffalo Bill Cody and Lewis and Clark as a first string All-American legend.

How he actually felt about the Indians is best expressed by Carson himself. 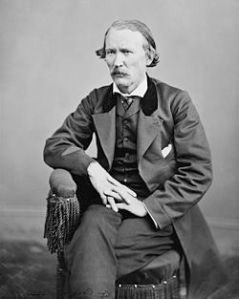 When the truly despicable Methodist Minister and commander of the Colorado Volunteers, John Chivington, massacred the elderly, the women, and children at the Cheyenne village at Sand Creek in 1864 while their warriors were out hunting, Carson was asked to testify at the resulting Congressional inquiry. He testified:

“Jis to think of that dog Chivington and his dirty hounds, up thar at Sand Creek. His men shot down squaws, and blew the brains out of little innocent children. You call sich soldiers Christians, do ye? And Indians savages? What der yer ‘spose our Heavenly Father, who made both them and us, thinks of these things?

“I tell you what, I don’t like a hostile red skin any more than you do. And when they are hostile, I’ve fought ’em, hard as any man. But I never yet drew a bead on a squaw or papoose, and I despise the man who would.”

Steve was inspired to write his latest novel after reading Hampton Sides‘ wonderful Blood and Thunder. This non-fiction history of Kit Carson and the West includes a report of the factual murder of Marshall Joseph Cummings on August 18, 1863, and led Kohlhagen to conduct further research, including work at the National Archives. He found Carson’s explanation for Marshal Cummings’ murder to be implausible. The result is his historical murder mystery, Where They Bury You.

Steve has very kindly offered to give away one autographed copy of Where They Bury You to someone leaving a comment.  The winner is Paul Colt.  The book can also be purchased at http://www.amazon.com/Where-They-Bury-You-Novel/dp/0865349398/ref=tmm_hrd_swatch_0?_encoding=UTF8&sr=1-1&qid=1389914377

Steve can be found at: