Back in 2015, my daughter and I were on a cross-country trip from New York with a turn-around in Wyoming. One of the stops I added to our route was Nicodemus National Historic Site, one of the oldest, and last remaining of the Black towns on the western plains. We arranged to meet with fellow author Eunice Boeve, who took us to lunch with Angela Bates. While initially reluctant to make this stop in Kansas, my daughter later swore it was one of the highlights of the entire road trip due to the informative and enlightening conversations we’d had with Angela.

Photo of Angela by Kathryn Sommers

Angela O. Bates is the executive director and past president and organizer of the Nicodemus Historical Society (1988). As a Nicodemus descendant and historian, she was responsible for obtaining National Historic Site designation for the town. For nearly 25 years, she has presented educational programs and one woman shows for libraries, schools, colleges, and organizations across Kansas and the nation. After serving on the Kansas Humanities Council in the END_OF_DOCUMENT_TOKEN_TO_BE_REPLACED

THE LONG AND WINDING ROAD

View from our room at Estes Park

Leaving the relative prosperity of Phillipsburg, KS, we headed down the highway wrapped in the ribbon of green and blue surrounding us. The expectation that the breadbasket of America would be rolling green pastures dotted with well-maintained farmhouses soon dissipated into alarm at the poverty we saw. While the farms seemed to be productive for the most part, the astounding number of dilapidated homes, falling down barns and silos, and other signs of abandonment, were only pointers to the towns we went through: closed and boarded shops, gas stations long ago deserted, empty streets. At times, driving through Nebraska, we wondered if we were truly in America. This was not the United States I was led to believe I live in.

Further despair was triggered when we passed a feed lot. Due to my love of anything western, and the cowboy way of life, if I eat beef it has to be grass fed. Having seen and smelled the feed lots, there is now no way I’d eat beef without the label of ‘grass-fed.’ The Yuma feed lot, in particular, which lasts for about two and a half miles, had us gasping for air and on the point of regurgitation. I cannot get across how thoroughly disgusted we felt.

This led to elation as we crossed into Colorado. In no time, The Rockies were in sight and I write to you now from Estes Park. There’s a feeling almost as if we’ve come home at last. 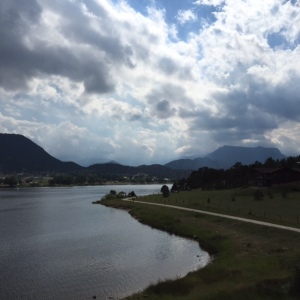 Several years ago I started a correspondence with a fellow member of Women Writing the West, Eunice Boeve. Eunie lives in Phillipsburg, KS, while I, of course, live in NYC, so you might think a more disparate twosome could hardly exist. But whether it was our writing, or just the feeling of kindred souls, we have regularly corresponded now for some time, including family news, health issues, and even politics among our discussions of writing successes and woes, and I have learned an amazing amount of information from Eunie, particularly about Kansas history. So it was Eunie who brought me to Kansas, who imbued in me the need to see KS for myself.

The first item on the day’s itinerary was the Orphan Train Museum in Concordia. The idea of moving thousands of street children and orphans to homes out west is startling to modern thinking, yet that is exactly what was done. Their various stories are preserved in this old station house, and have now been retold in numerous novels. It is a startling facet of American history.

Driving through the Kansas countryside to our appointed meeting with Eunie at Nicodemus, it was Cristal and I who were displaced. The flat plains of Kansas is disconcerting to New York gals—devoid of buildings, few people, little traffic, and stretching into the distance with an endless horizon that wraps around you 360 degrees. But, at last we reached Nicodemus and Eunie, waiting there for us. She introduced us, in turn, to Angela Bates, descendent of one of the first African American pioneers who settled this township of former slaves from Kentucky. Conversation was stimulating over lunch, though it was heart-breaking to see so many buildings of this settlement in a sad state. Today there are only 13 persons still living in Nicodemus.

However, the day proved one of our best yet. Eunie, I know you’ll be reading this: we appreciate all you did, and are grateful for such generosity. We remain ever thankful as we journey on. 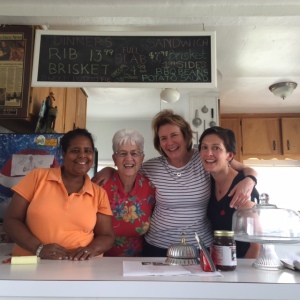 Posted in History of the West, Western Culture, Women writers

The Role of Newspapers in Kansas Territory

I felt an immediate affinity for my guest this month, Linda S. Johnston.

Not only are we the eastern stronghold of Women Writing the West, but we have both lived in Great Britain and have both moved house an inordinate amount of times. While I beat Linda in years spent in the U.K., she certainly outdoes me in moves—more than fifteen, including places as diverse as Margate,  England; Seattle, END_OF_DOCUMENT_TOKEN_TO_BE_REPLACED

Posted in History of the West

THE ORPHAN TRAIN by Eunice Boeve

Author Eunice Boeve writes award-winning historical fiction for both adults and children.  In her home state of Kansas, she has also had two serials of historical fiction for children featured in syndicated newspapers for a program called Newspapers in Education.  The program, which targets schools, also provides guides for classroom use.

Posted in 19th C., Historical Novels, History of the West, Literature of the West