I’m pleased to have with me this month both fellow author of The Wild Rose Press, and fellow member of Women Writing the West, CJ Fosdick. CJ was born and raised in Milwaukee, Wis. but has lived her adult life in Rochester, MN. where her writing career escalated from local and nationally published award-winning stories, articles, and anthologies to her first novel. The Accidental Wife began life as a short story that won a Laura Award from Women Writing the West in 2013. The debut novel was a top ten P & E winner for Best New Romance and Author and like the sequel that followed, a Golden Quill Finalist. For 15 years, she trained horses and children who rode them on her hilltop acreage called Mt. Pegasus, occasionally venturing down to research her next writing project. One of her stories is available on audio, and the most recent published in Distant Echoes, a British anthology of historical stories by award-winning international authors.

Vacations for writers are always rewarding when combined with research. The family vacation in 1977 that ignited my love of the historic west was mapped on poster board that had us following a route from Rochester, Minnesota through several states. Forts and battle sites were dots on our trail, along with wagon ruts, Register Cliff and Chimney Rock, but Ft. Laramie was the starring interest. I didn’t know it then, but the celebrated fort would invade several of my books.

Original buildings including the cavalry barracks, Old Bedlam, and the Burt

house would become specific sets in my historical fiction and time travel suspense.

For much of the 19th century, the strategically-located garrison was a fueling station and protectorate for pioneers heading west. By mid century alone, over 50,000 emigrants stopped at the oasis. The railroad began to cork the wagon flow in 1869 but the fort flourished for 20 more years until it closed in 1890. Our 1977 counterpart of a pioneer conestoga was an orange Volkwagen camper with a tiny frige and seat cushions that converted to beds for two adults, two young children and a Schnauzer. Armed with cameras, notebooks and tape recorder, I was a kid in a candy store. A writer with a book in gestation. A gestation that would last decades. (A long story-involving moves, more children, horses, and a manuscript stored in a freezer.)

Hubby and I returned to Ft. Laramie after our nest…and barn emptied in 2014. The Ft. Laramie National Monument had improved greatly between visits. An 1876 bunkroom re-created in the Cavalry Quarters became a key site in Book two, The Accidental Stranger. Was it also coincidental that our tour guide was a distant cousin of one of my neighbors back home? By this time I was deep into Ft. Laramie history, intrigued by documentation of a young female ghost that appeared at the post every seven years, riding a black horse. The story is included in The Accidental Wife.

I was also corresponding with the great grandson of one of the post commanders and Sandra Lowry, the long-time fort archivist and librarian. I finally met Sandy in person during my second tour, before she took a medical leave that would end sadly. Happily, I had already dedicated The Accidental Wife to her, providing her a bit of immortality with a minor character in both books named Stella Lowry. She was amused by the coincidence since her mother in law’s name was Stella Lowry.

Historic locations always make me feel I am walking lockstep with ghostly figures who lived centuries ago. The “coincidences” associated with Old Ft.

Laramie weren’t lost on me. After my stepmom died two years ago, I found old photos of her and my late father taken at Ft. Laramie on their 1954 honeymoon. I recognized one of them was taken in front of the old Burt House where the heroine of my novel series slips back in time at a re-created tea party. My stepmom loved The Accidental Wife, but never mentioned that she had actually been to Ft. Laramie as a new bride. Yet another coincidence…or ghostly sanction to finally give birth to a story that had to be told? 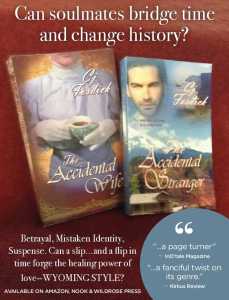 When Jessica Brewster inherits a mysterious teacup, she finds rubbing it transports her back to 1886, trading places with her look-alike great grandmother—wife to Mitch, her ancestor’s magnetic first husband and mother to his charming young daughter. True love, a gypsy, and her ancestor’s troubled brother amp up the charade she plays until she can find a portal back. But is her future in the past? Her life hangs in the balance.

Jessica Brewster is being watched…and things go missing from the remote Wyoming home she shares with her toddler. In a freak accident, she shoots the bearded thief stalking her before she recognizes the mesmerizing green eyes that belong to the only man she ever loved.

Has Mitch bridged time to find her? In a race to save his life and change hers forever, she takes him into her home and heart. But his memory loss and puzzling clues curry doubt and expose mystery and danger. Is he truly her son’s father or an irresistible stranger in her arms?

Excerpt from The Accidental Stranger:

I screamed as the heavy revolver exploded in my hand and fell to the ground. The bear moving toward Scout dropped, and I raced to scoop up my son before he toppled into the cold black stream. The dog shoved something wet against my leg and began to bark, running from me to the Beaverwoods, now cautiously circling the bear. The boys were armed with pieces of thick deadwood and Chuck picked up my smoking gun, cocked the trigger and ordered his sons to stand back. He aimed the gun to finish the animal off, then suddenly dropped his arm and knelt beside the still lump of fur.

Tommy grasped the growling dog by its collar, and in the sudden silence, I could hear a collective gasp. Someone uttered “Jeesus” like an invocation. Still cradling my son, exhausted by fear, I ventured closer and could see at once that it was no bear I shot. A man in a bearskin poncho lay on his side. Chuck rolled him over and pulled off the man’s hood. A mass of dark matted hair covered the part of his face that wasn’t blooming with blood, pooling into his left ear, running down his cheek and into his thick beard. “Is he, is he dead?” I whispered. Chuck took off his glove and wiped the man’s neck with it, then fumbled for a pulse. We all started when the man groaned and his eyes fluttered open. Green! His eyes were green, the rarest of all eye color. The fear in them more than the color registered with me as he searched our faces…stopping at mine.

Oh God, did I shoot the only man I ever loved? 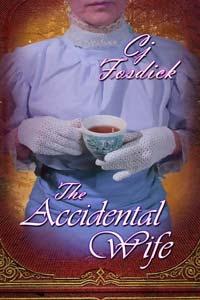 Or to get both books, go to https://amzn.to/2IdLXFh

13 responses to “Ghost Busting at Fort Laramie by CJ Fosdick”