This is the third anthology on which I’ve had the  pleasure of working with Patti Sherry-Crews, and I’m not sure I could proceed to work on one without her!  She has been a redoubtable ally against the foibles of publishing, and has stopped me from pulling my hair out on many an occasion with her delightful wit and sense of humor. Patti Sherry-Crews lives in Evanston, IL with her husband and two children. She writes both historical and contemporary romances. Her historic western and medieval romances are published by Prairie Rose Publications. Patti is also known to do the occasional good deed.

My cheery neighbor comes toward me, arms extended. We greet each other with a hug, because it’s been a long time since we’ve seen each other.

“Where do you get the ideas for your stories?” she asks me.

Well, neighbor, I’m not sure that’s something I want to share with you at this late date, I think to myself. I’d taken a short break from writing Phoenix Heat, to pop in at an open house down the street.

The thing is, I’m writing a scene taken from the pages of my own book and it involves this woman. Years ago, decades really, a massive storm was about to break. I was hurrying home when I saw a dog frantically trying to get into her house. I rang the doorbell but nobody was home, so I let the dog into the vestibule and went on my way. Good deed done. I’ll collect my karma later, thank you.

Months later I overheard my neighbor talking to someone. “And, I came home to find a strange dog in the hall! It shredded the wallpaper and ate a table!”

If I had heard this immediately after throwing a dog into her house, I’m sure I would have said something. But since so much time had passed it seemed enlightening her wouldn’t help the situation, so I zipped my lip. Instead, I stored the incident away in my writer’s brain to use at a later date, thinking what better way for a hero and heroine to meet?

Writers do that: we tuck away the odd incident witnessed, bits of strange conversations overheard, and significant experiences for later use. I think of my stories as scrapbooks for my memories.

When I was developing the character of Frank Flynn, who is the firefighting cowboy in Phoenix Heat, I had a vision of what I wanted him to be like. Sort of a self-contained, quiet guy whose still waters run deep. I wanted him to have something in his past he carried around with shame. It also had to be something that makes him turn away from Harper Donovan when they meet. Whatever it was haunting him, it couldn’t be so terrible that the reader lost interest in him.

Then I thought how some of our deepest wounds are things we carry from childhood. Maybe even things we had no control of like having a family different from everyone else’s.

So, I gave Frank a family who lived down the street from me when I was growing up. Without giving too much away, this was a household run by teens. There were five extraordinarily good-looking kids, who got into every kind of mischief kids without parents around can get into. As a kid, it was a fun house to visit, but as an adult I reflected on what it must have been like to live there. Only one of the five children, the oldest daughter, went on to make a stable life for herself. I gave Frank the strength of character she had to rise above it all.

I hope you enjoy Phoenix Heat! And by the way, my neighbor’s dog was a greyhound and the dog at her door was also a greyhound, so I ask you what would you have done? In fact, I’m now asking myself if there were two times someone threw a dog into her house, because unless you frequent the race track how often do you see greyhounds?

Harper Donovan thought she had it all when she turned her dream into a reality—opening a restaurant in New York City. But when the venture fails and her fiancé leaves her, Harper has little choice but to return to her family in Arizona.

When she meets handsome firefighter and cowboy Frank Flynn, she decides it’s time to get in the dating game again. Except Flynn shows no interest and dodges her, but not before claiming they’ve met before. Solving the mystery of the complicated Flynn gets under Harper’s skin, making her even more determined to seduce him.

When the two finally come together, the smoldering passion ignites into a heat that rivals the Phoenix desert. Now that Flynn has opened his heart, can Harper handle this wounded cowboy who’s playing for keeps?

Harper rolled down her window as Flynn approached and looked back at him over her shoulder. His feet landed in her tire tracks leading him closer, boot prints stamping a new pattern in the dust. Maybe she could hand him the bag and be on her way. He leaned down and put his hands on the driver’s side of her car with his arms spread wide. Oh my. He has a tattoo. Around one muscular bicep ran a band of Celtic design. He had his cheek sucked in like he wasn’t too pleased to see her.

“Hi, I brought you some food from the hotel,” she said, surprised by the slight squeak in her voice when she’d been going for relaxed.

“Rosa have you running her errands?” No squeak in his voice. He spoke in a deep, slow drawl. Very sexy.

“I know where you work,” he said in that same slow, deliberate way. That man didn’t do anything fast.

“Oh, right, well, here you go then,” she said, shifting the bag in his direction. “Nice of you to do this. I brought the food yesterday, so I know normally I’m to put the bag on the back porch.”

To her discomfort, he stood there, not reaching for the bag, intense eyes boring into her. She lifted the bag higher. “Well, here you are. I’ll just be on my—”

“Yesterday? You were here?” The muscles in his wide-spread arms bulged, making her feel like prey trapped by a more powerful opponent. His body, radiating heat, blocked her view. His male scent filled the car.

“Yes, I let your dog in too. Poor thing was frantic to get in with the storm coming.”

His face got tight and he narrowed his eyes. “Very kind of you, except I don’t own a dog.”

“That dog did some damage.” A vein in his neck twitched and his compressed lips went white.

The scorch of shame flashed over her cheeks. “I’m so sorry! It never occurred to me…. Was it bad?”

“Words fail to describe. Let me show you what I came home to yesterday. Come on,” he said when she continued to sit in the car.

He stood back to let her open her door and step out into the hot sun, pulling the bag after her. She stood face to face with him now. With his hands hooked in his belt loops, elbows out, she was aware of the size of him. Large and imposing, his body held her captive without touching her. She didn’t know what to say, and he seemed to be taking his time raking her over with his eyes. He stood so close to her, she smelled the musky scent of him. The individual stubble of each whisker on his chin, clear to her.

Finally, he walked away, moving to the back of his truck, where he picked up something large and threw it over one shoulder—a fifty-pound bag of dog food.

“I thought you said you don’t have a dog?”

You can find out more about Patti at

THE LEGEND OF BAD MOON RISING by Carra Copelin

Sheriff Ben Hammond is finally over the woman who shattered his heart, but when Dinah Horne suddenly returns, can he ignore the passion still burning bright between them?

Trading horses for subways for two years seemed like a good idea to cowboy Chay Ridgway, but can city girl K.C. Daniels keep a rein on his country heart?

Archaeologist Audrey Driggs rolls off a mountain and lands at the feet of rugged cowboy Braden Delaney. Together, they’ll uncover a long-lost secret.

THE DRIFTER’S KISS by Devon McKay

Determined to take back what belongs to her, Addison Reed will do anything. Even trust a complete stranger.

HER MAN by Hildie McQueen

Deputy Mark Hunter falls for Eliza Brock during a murder investigation. Is it fate or bad luck, especially when she may be involved?

Widow Leticia Villarreal wants to establish a horse-racing stable and old acquaintance John Clay Laidlaw offers to help. But can she trust him with her business and her heart?

After losing her fiancé and her New York City business, Harper Donovan returns to Arizona and meets cowboy Frank Flynn. Will his past and their differences extinguish the heat between them? 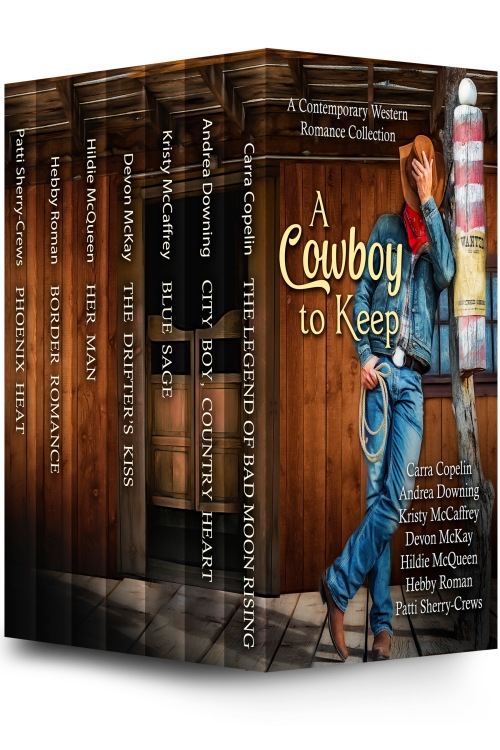 This entry was posted in Western Romance Literature and tagged A Cowboy to Keep, Patti Sherry-Crews, Phoenix Heat, writers' inspiration. Bookmark the permalink.