I’m so pleased to welcome back another pal from Women Writing the West, USA Today Bestselling Author Shanna Hatfield. Shanna writes character-driven romances with relatable heroes and heroines. Her historical westerns have been described as “reminiscent of the era captured by Bonanza and The Virginian” while her contemporary works have been called “laugh-out-loud funny, and a little heart-pumping sexy without being explicit in any way.”
Convinced everyone deserves a happy ending, this hopeless romantic is out to make it happen, one story at a time. When she isn’t writing or indulging in chocolate (dark and decadent, please), Shanna hangs out with her husband, lovingly known as Captain Cavedweller.
Please connect with Shanna online. She loves to hear from readers.
ShannaHatfield | Facebook | Newsletter | Pinterest

Shanna is happy to offer two chances to win one of her books: one for a digital copy of Garden of Her Heart and the second for an autographed paperback copy of the book. I am pleased to announce that Hebby Roman has won the digital copy and Brigid Amos will receive the signed paperback.  Thanks to all who commented.

Thank you for welcoming me to your blog, Andrea. Such a pleasure to be your guest today.

Life for all Americans changed when Japan brought death and destruction to Pearl Harbor in 1941. The attack drew the United States into a war the nation had steadfastly tried to avoid.

History of the war years often glosses over the fact that thousands of people were placed in internment camps right here in America.

Thousands of German and Italian residents were detained by the government during the war, many at Ellis Island. However, the Japanese Americans bore the brunt of the fear and unrest that swamped the country following the devastation at Pearl Harbor.

Seventy-five years ago this month, President Franklin D. Roosevelt issued Executive Order 9066, on February 19, 1942. The order authorized the evacuation of anyone deemed a threat to national security from the West Coast to relocation centers further inland. More than 120,000 men, women, and children of Japanese descent were detained in fifteen assembly centers in the spring of 1942.

Many of these people were born in America, some second or third generation Americans, but their place of birth became irrelevant in the coming days. Those living in the evacuation areas were forced to leave behind their homes, sell their possessions for mere pennies on the dollar, and abandon their businesses to report to assembly centers — or become fugitives in the land they called home.

Eventually, the government moved detainees to isolated, fenced, guarded internment camps located across the United States where the majority of the Japanese Americans stayed until the end of the war.

Research for the Hearts of the War series took me to Portland, Oregon, where I learned about the Portland Assembly Center. Originally, it was the Portland Livestock Exposition Pavilion. The government housed more than 3,500 detainees there under one roof during the summer of 1942 before they were sent to internment camps in California, Idaho, and Wyoming.

The stench of the manure trapped beneath the hastily constructed floor and flies buzzing everywhere added to the trying conditions, especially during the long, hot summer months. Meals were served in a mess hall in shifts. Privacy was nonexistent.

The “apartments” had just enough floor space for about five Army cots. Rough 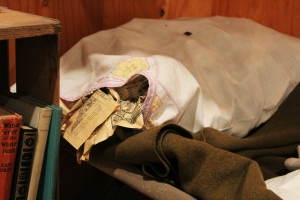 eight-foot high plywood walls divided one family from another. With no ceiling, noises from adjoining families echoed day and night. Yet, in spite of the hardships and trials, gardens were planted, a newspaper started, classes taught, and hope sustained.

I tried to envision what it would be like to live there. To live in such difficult, challenging conditions when the only thing they had done “wrong” was to be born to a Japanese heritage.

What would it be like to be a faced with a choice of doing what your country ordered or what you knew in your heart to be right? Would you follow your heart? Would you forsake everything for love? Would you willing become a fugitive in the land of your birth to save a life?

The moment the Japanese bombed Pearl Harbor, life shifted for Miko Nishimura. Desperate to reach the Portland Assembly Center for Japanese-Americans, she’s kicked off the bus miles from town. Every tick of the clock pushes her closer to becoming a fugitive in the land of her birth. Exhausted, she stumbles to her grandparents’ abandoned farm only to find a dying soldier sprawled across the step. Unable to leave him, she forsakes all else to keep him alive.

After crashing his plane in the Battle of the Atlantic, the doctors condemn Captain Rock Laroux to die. Determined to meet his maker beneath a blue sky at his family home, he sneaks out of the hospital. Weary and half out of his mind, he makes it as far as a produce stand he remembers from his youth. Rather than surrender to death, Rock fights a battle of the heart as he falls in love with the beautiful Japanese woman who saves his life.

A poignant, sweet romance, Garden of Her Heart proves love can bloom in unlikely places even under the most challenging circumstances.

Here is an excerpt from the story:

Instead, her father stared at him and asked a single question.  “Describe Miko in one word.”

“Yes. If you summed up everything about her in one word, what would it be?” Jack’s face remained impassive as he waited for Rock’s answer.

Taken aback by his request, Rock’s thoughts splintered in a hundred directions. Only a few seconds passed before the word that floated through the maelstrom in his head gained clarity. “Hummingbird.”

Baffled, both Shig and Jack stared in confusion.

Rock took a deep breath. “Before I was wounded, I was stationed in Trinidad, off Venezuela’s coast in the southern Caribbean. The area is a big melting pot of combined cultures — Creole, East Indian, Chinese, African. A great diversity of flowers and shrubbery grow there, and it offers more than four hundred different species of birds. But do you know what they call the island?”

At the men’s interested looks, Rock continued. “Land of the Hummingbird. While I was there, I saw many of them. The islanders believe hummingbirds are symbols of all that is good and they carry joy wherever they go. Hummingbirds are fearless, determined, adaptable, and flexible. They possess the courage of a mighty lion and the magic of mythical fairies. Hummingbirds have boundless energy and endurance. Those little birds can make the most difficult journey seem like a simple matter, and they are loyal, devoted to the garden they claim as their own. They are fiercely independent, but those who accept that can long enjoy the beauty and wonder of those amazing little winged fellows.”

Jack’s mouth quirked upward and he bit back a smile. “So you’re saying Miko is like a demented bird who wants only to suck the sweetness out of life?”

23 responses to “Struggles and Hope During WWII’s Japanese Internment”