A Fence Around Her: Double-jacking Competitions

Brigid Amos’ young adult historical fiction has appeared in The MacGuffin, The Storyteller, Wilderness House Literary Review, and Words of Wisdom. As a  playwright, she co-founded the Angels Playwriting Collective and serves on the board of the Angels Theatre Company. She is also an active member of  the Nebraska Writers Guild. Although Brigid left a nugget of her heart behind in the California Gold Country, most of it is in Lincoln, Nebraska, where she currently lives with her husband.

As a fellow member of Women Writing the West, I was quite enthusiastic when she approached me about being a guest here with her post on Double-jacking Competitions.  What the hell is that?  A part of western history with which I was not acquainted!  Let’s find out more.

In a western mining town around the turn of the twentieth century, no Fourth of July celebration would have been complete without a double-jack competition. Double-jacking was a method of hand drilling in which two miners worked together, one holding and turning the drill steel in place on the rock while the other struck it with an eight-pound, long-handled hammer. It took a lot of trust on the part of the “shaker,” the miner holding the drill, and a lot of strength and stamina on the part of the miner striking the drill with the heavy hammer. For this reason, the miners switched off roles periodically. The miners would get the drill hole started with a short drill, and as the hole became deeper and deeper, they would use longer and longer drills. 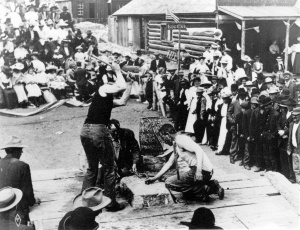 Eventually, machine rock drills replaced hand drilling in the gold and silver mines of the western United States, but people were still eager for the skill, strength, and courage on display in a rousing double-jack competition. In such an event, all the hard work that miners used to do to drill by hand was speeded up and intensified, because the winning team was the one who drilled the deepest hole in a block of granite in fifteen minutes. The two men on a team would switch roles every thirty seconds as they hammered drills ranging from one foot to four feet in length.

How deep a hole could a two-man team drill in a double-jacking competition? In 1907, a team in Butte, Montana sank a hole nearly 46 inches deep. How much money could they win? In 1900, $5000 was offered in the Colorado state competition. Just for fun, I put that number into an online inflation calculator and discovered that this purse would be worth around $144, 000 today. Top athletes in popular spectator sports have always been well paid!

When I read about double-jacking contests, I knew I had to include one in my young adult historical novel, A Fence Around Her. In the following excerpt, my protagonist, fourteen year old Ruthie Conoboy, describes such an event on July Fourth in the gold mining town of Bodie, California. She is watching it with her parents and best friend Susanna. The stars of the competition are the burly Shaw brothers from Montana, but Ruthie’s focus is on a young Bodie miner named Robbie Van Ciel. She and Robbie have only exchanged a nod while passing on the street, and they speak to each other for the first time after the competition.

Excerpt from A Fence Around Her:

All the competitors laid their hands on the boulders and fixed their eyes on the timekeeper. He, in turn, raised his hand into the air as if swearing an oath and fixed his eyes on his pocket watch. At this point, the crowd fell into a silence so profound that it seemed the timekeeper had stopped time itself by his gesture. The wait for the second hand to sweep up to twelve seemed to stretch into an eternity, and we stood frozen in a tableau of anticipation.

“Go!” The timekeeper dispelled the unnerving silence by slicing the air with his open hand. All the teams lunged for their tools. One team member propped the smallest drill upright on the boulder and clutched it with both hands while the other pounded on it with quick, angry strokes. After each blow of the hammer, the holder rotated the drill a fraction of a turn. The crowd erupted in shouts intended to encourage one of the teams, but these blended together to form an incomprehensible block of sound that energized everyone present.

The pounding continued, ceasing only for a change of drill. As each drill was driven down so far that it seemed about to be swallowed whole by the rock, the holder would yank it out and replace it with a longer length of steel, and the striker went at it again. Some team members switched roles during the change of drill, others switched when the striker’s energy began to flag. Each of the Shaw brothers seemed to be able to go on striking the drill longer than any of the other competitors, and these two switched less often. Together they seemed to form a drilling machine made of muscle and sinew. I wondered what they were thinking, or even if they were thinking. It seemed to me that their thoughts were on something other than the three hundred dollars the residents of Bodie would pay them, for no one could work that hard for mere money.

At one point, I looked at Robbie Van Ciel as he struck the drill with an intense focus and unwavering precision. With each strike of the hammer, long rope-like muscles pulsed under the skin of his thin arms, and I marveled at his strength. His face was so red that it seemed ignited from within, and I felt myself alarmed by his appearance. I was certain his heart would burst from exhaustion, causing him to crumple dead to the ground, and I prayed that the competition would end before that happened.

“How much more time?” I asked my father.

“Seven minutes.” He had pulled out his own watch along with the timekeeper, and had been checking it periodically throughout the competition.

“So much time left?” I looked in Robbie’s direction again.

What seemed an eternity later, my father leaned down and shouted in my ear. “Two minutes!” Within a few seconds of this pronouncement, I heard a cracking sound that seemed different from the sound of the hammer striking the drill, and the two big Shaw brothers leapt with surprising agility away from their boulder as it split and a portion of it fell away to the ground where they were standing. The brother who had been holding the drill somehow extended his leap to the collection of discarded shorter drills lying on the ground. He grabbed the shortest of these and propped it up on the standing part of the boulder while his brother started pounding it as if nothing had happened. It felt as if the whole incident took place within the time span between one blow and another.

“They can add the length of this hole to the first one. See, you can see the first hole in the exposed face of the rock. These boys are a marvel. I’ve never seen their like before.” My father seemed rather pleased with the mishap.

“Time!” The competitors stepped away from their work and dropped their hammers to the ground. The judges then made the rounds of the boulders with a measuring stick. With a combined depth of forty-nine and five eighths inches for both holes, the Shaw brothers far out drilled the other teams to win the three hundred dollars. Robbie Van Ciel and his partner came in second. They held a handsome commemorative plaque between them for the photograph as Robbie’s face, now returning to its normal pallor, was lit by a wide, joyful smile. 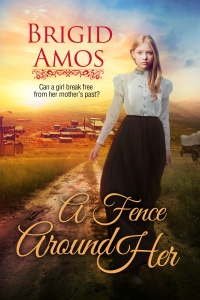 About A Fence Around Her:

Can a girl break free from her mother’s past?

Having a mother with a past is never easy. For Ruthie Conoboy it becomes the struggle of a lifetime in 1900, the year Tobias Mortlock arrives in the gold mining town of Bodie, California. Ruthie is suspicious of this stranger, but her trusting father gives him a job in the stamp mill. Soon, Ruthie suspects that her mother and Mortlock have become more than friends. Can Ruthie stop this man from destroying her family?

And you can find out more about Brigid at:

This entry was posted in Historical Novels, History of the West, Literature of the West, Western Culture and tagged A Fence Around Her, Brigid Amos, California gold mining, Double-jacking competitions, young adult book. Bookmark the permalink.

24 responses to “A Fence Around Her: Double-jacking Competitions”