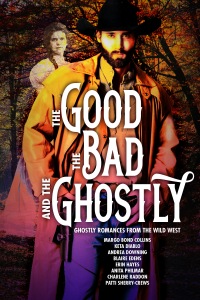 We hear an awful lot about ghost towns in the West, but maybe not so much about ghosts themselves. Have you ever seen a ghost? My own, personal encounter with a ghost was actually in Hampton Court, King Henry VIII’s favored residence outside of London. I was walking down the long corridor (known as the Haunted Gallery) and, just at the very moment a tour guide was saying it was haunted and some folks might feel a chill, I got such a chill I nearly jumped out of my skin. Let me make it clear: this was not a chill like one might get on a cold day; this was a true spine-tingler! Even my daughter, who was with me, looked at me and asked what was wrong.

On a ranch down in Texas a few years back, having attended a writer’s retreat, I decided to stay a few extra days before going onto a conference. The ranch was now empty and out of season, but the owners wouldn’t let me stay alone in the guest house—because it was haunted. They had to have someone stay in the building with me. A man had been hung somewhere on the ranch and his ghost walked the guestrooms. I was rather disappointed not to see the cowboy, actually, though I’m not sure what I would have felt if I had.

And that’s the thing—I think we like to hear ghost stories, and the idea of an afterlife certainly is appealing, but whether anyone truly wants to come face to face with the dead is quite another matter. The road I live on is said to be haunted—Whooping Hollow is named for a Native American killed nearby. I’ve never had the pleasure of encountering him, however…thank goodness…and I’m not sure what I’d do if he appeared. Living in a village founded in the 1600s, however, certainly makes one aware of the lives that have passed down these roads.

With Halloween just around the corner, as the catalogs coming through my mail seem to indicate from around July onwards (!), you may feel like settling down with some good ghost stories to get you in that seasonal mood. You’ll be encountering the ghosts only on the page, I promise. The Good, The Bad and The Ghostly brings together my favorite setting of the Old West with something very new and different for me—ghosts, or the paranormal, and, of course, there’s romance. Our anthology contains eight very individual stories, some from authors who normally write western romance, and some from authors who normally write paranormal. I thought that was an exciting idea, and I hope you do, too. Over the next few weeks, I’ll be introducing the authors individually to tell you about their stories.

For now, keep both the Halloween costume and Stetson to hand, and a bowl of corn candy. And if you’ve ever seen a ghost, please comment below. We love ghost stories!

My own story is LONG A GHOST, AND FAR AWAY  Here’s the blurb:

When Lizzie Adams returns as a ghost to a life she led in the 1800s, she is surprised to find herself on a ranch in Wyoming, but delighted to learn she was married to a handsome and loving man. The reasons for her return become clear when she discovers how she died, yet the unresolved issues surrounding her death leave her unable to either live in the 1800s or return to her present life.

Colby Gates misses the wife he loved, yet a ghost is a poor substitute. Re-married to a woman he doesn’t care for, and with outlaws searching for buried gold on his ranch, the spirit of his wife is a further complication.

But perhaps if the questions surrounding Lizzie’s death can be answered, the two can be together.

And an excerpt for you:

“OH! I do beg your pardon. What year are we pretending this to be now?”

Colby raised a brow in what looked like slight irritation. “It’s 1897.”

“Well, there are phones, but not here.”

“I see.” Lizzie shook her head as if she would go along with this whole pretense. “And so I can’t phone a friend to collect me in their car because, of course, there are no cars.”

“Well.” Colby hesitated. “I’m afraid I have no idea what a ‘car’ is other than the car of a railroad train but, yes, there aren’t any. Or do you mean automobiles? We have them—”

“But not here,” Lizzie finished for him. Unable to help herself, she burst out laughing. Jason had really done a good job, and this Colby fellow was a really good actor. He stayed in his part throughout, gave nothing away. “Okay, listen….” She tried to take in a breath but the corset was really biting into her now. “Is there someplace we can go, is there someplace I can go and get the hell out of this corset or whatever the heck you call it, and then perhaps you can give me a cup of tea or something, and we can sort this out?”

“Elizabeth, there is something you should know.” His voice was strained, hesitant.

“There’s a lot I should know, Colby Gates, but what specific item have you got in mind?”

Lizzie covered her eyes with her hands and sighed with the weight of the universe on her shoulders. “Okay, listen. Really. I don’t want to intrude on you and your wife, I don’t want to be part of this ridiculous farce any more, and I sure as hell don’t want anything more to do with Jason Beeme. Just let me go home, all right? Let me go home? Please? Pretty please?”

Colby blew out a breath and shook his head. “Elizabeth. Lizzie. I have no idea who Jason Beeme is, and this ‘farce’ as you call it, it puzzles me as well. I don’t know how you are here; I only know what I’ve told you. We were married, happily married—very happily married and then….”

“I died. I’m dead. I see.” Hysteria was now setting in, and Lizzie couldn’t help the small giggle that escaped. “I’m dead, but I’m here, is that it?”

Colby didn’t answer. It was as if he hadn’t thought that at all, just been confused as much as she by the situation. He seemed to mull this over now.

“Am I now a ghost as far as you are concerned?”

His “yes” came out almost as a breath.

“Ninety-seven,” he corrected her.

She looked him in the eye, nose to nose. “I don’t give a good flying…you-know-what, what year you think it is. I want to go home, and I want to go home now, so just let’s stop playing around with this shit and—”

“You never used to use such language.”

“Mister! Colby! Please stop! The year is 2016 and I can say whatever the hell I please. Women are liberated. We’re free.”

“Well, excuse me! ‘Lady-like’! Okay, I’ve had enough now. Take me home, please.” She rubbed her face with exasperation; this whole sham was un-be-lieve-able.

“Well, good for you. I’m glad. I hope you’ll both be very happy. So, just take me to my apartment on Washington Avenue in St. Louis.”

She thought he was gagging as he rubbed his forehead.

“Lizzie: you’re in Wyoming. We’re on a ranch near Buffalo, Wyoming. You’re miles from St. Louis.”

Lizzie could feel her eyes grow big; she thought they might pop out of her head. “Wyoming? Boy, Jason really did a job on me. Brother, how long was I out?”

Colby shook his head. “I have no idea what you’re talking about. As I said, I don’t know a Jason, I can only tell you it’s 1897, you’re in Wyoming, you’re my wife—or were my wife—before you…you…died.”

Lizzie felt the breath was being pressed out of her, and if she didn’t get out of this barn, and out of the corset soon, she would, indeed, die for real. “Okay,” she said giving in, “I’m dead. But this corset is killing me, so can we go some place and let me take it off. Maybe your wife could help?”

“Sylvia is visiting her aunt over in Kelly. She won’t be back for a few days.”

“How convenient!” Ha! One less actor to deal with.

“I’ll take you in the house and we can sort things out there.” He offered her his hand, which she took, looking up into his pale eyes, and let him lead her out of the barn into chill air. The sun was laying its colors on the horizon and she figured it must be late afternoon, wherever she was.

“So, I’m dead,” she said conversationally.

“Well, you were. You seem very much alive at the moment, I have to say, but that’s quite impossible.” He stopped.

Lizzie glanced over at what was no doubt the house, a log structure of good proportion, with a lantern lit and glowing through a window. The last rays of the sun elongated their shadows, and for a moment, she tried to breathe in the cool air deeply.

“Impossible,” she whispered. “To be here like this.” She turned to him, the attraction so great suddenly she wished this wasn’t all some huge act laid on to fool her. “So, I’m dead,” she repeated once more.

“Yes. I think so.” There was a depth of sadness in his voice she couldn’t fathom.

Colby Gates stood stock still beside her and let her hand go. He turned to her in the fading light, and Lizzie could see him swallow hard as he removed his Stetson and brushed an invisible speck from its brim before replacing it on his head. Then he looked her in the eye.

This entry was posted in Uncategorized, Western Romance Literature, Women writers and tagged Andrea Downing, ghost stories, ghosts, Long a Ghost and Far Away, Old West, The Good The Bad and The Ghostly. Bookmark the permalink.