WHY WE LOVE COWBOYS

Fellow author from Come Love a Cowboy, Margo Bond Collins, is addicted to coffee (mmm…caffeine) and SF/F television, especially Supernatural (mmm…Winchesters). She writes paranormal and contemporary romance, urban fantasy, and paranormal mystery. She lives in Texas with her daughter and several spoiled pets. Although she teaches college-level English courses online, writing fiction is her first love. Margo’s story in our anthology is titled Leaving Necessity and, despite the fact she is into vampires, ghosts, and werewolves, she knows a good man when she sees one–a cowboy!

I grew up in Texas, in a small town housing the only college in the country that offered a degree in rodeo. (Technically, it’s a degree in agri-business, with a specialization in rodeo. Still, it was the only one—and may still be!)

So I grew up around cowboys. I went to rodeos to watch my cowboy friends rope and ride, winced when they were thrown by a bull or a bronco. I helped toss hay out of the back of pickups while my cowboy friends lured the cattle in with their own special call (I didn’t even know the term “cattle call” meant anything other than calling cows in for dinner until I was an adult). I’ve been to cattle auctions and I’ve watched cowboys guide their animals onto trucks after a sale. I learned to dance—the two-step (fast and slow), the waltz, the Cotton-Eyed Joe—from cowboys.

But I didn’t really learn to appreciate those cowboys until I moved away from Texas for several years. They were just part of the background, part of the world I lived in. Until I wasn’t around them any longer, I didn’t really know how much the cowboys I grew up around had shaped my ideas of what makes the ideal man. Now that I’m back in Texas, I’ve spent some time thinking about what it is that is so appealing about a cowboy.

Of course, it doesn’t hurt that all that hard work—the roping calves, riding horses, hauling hay, mucking out stalls, and such—generally leads to a great body. Most cowboys are lean and muscled, and I could spend hours pinning cowboy pictures to my Pinterest page (and maybe I have, once or twice . . . ).

But I think there’s a lot more to our long-lasting cultural love affair with cowboys than just their toned muscles.

The cowboy represents the epitome of American masculinity, I think. He’s the quintessential strong, silent type. But while he might not talk too much about how much he loves someone, he shows it in every action.

Even if a woman might not know how a cowboy feels about her, his huge capacity for love shines through in the way he treats his family, the animals under his care (who doesn’t love the way a cowboy tends to his horse?), even the very land he works.

And he works hard—often from sunup to sundown, often for little pay. That kind of dedication comes from a deep belief in the value of the work he does, and his ability to value actions above words often translates to his treatment of the people he loves. Every move he makes says “I love you,” even when the words never pass his lips.

He can play hard, too—he might not let loose often, but when he does, he can be loads of fun. All that Saturday night dancing can be exhilarating!

He has faith—usually in a God, but almost always in the world around him. Even when things seem bleak, a cowboy generally knows (even if he doesn’t talk about it) that with some hard work, some play, and a little attention to the people, animals, and land he cares for, things will work out in the end.

And with an attitude like that, who wouldn’t love a cowboy? 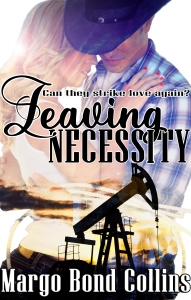 Can they strike love again?

At nineteen, Clara Graves left Necessity, Texas, to try to heal her broken heart. She swore she would never come back, and she’s kept that promise. Until now. When she returns for her uncle’s funeral, she inherits a small oil company that may keep her tied to Necessity for a few days longer than she expected. But as soon as she can close or sell the business, she’s pointing her boots toward greener pastures.

To this day, Mitchell MacAllan regrets letting Clara go without a fight. But his whole life was in Necessity, and leaving town wasn’t in the cards. As the foreman of Aerio Oil and Gas, he works hard to keep the townspeople employed and maintain the business, despite a recent downturn in petroleum prices.

Now Mac has less than a week to convince Clara that she should give Aerio a chance, and maybe even forgive him in the meantime. Otherwise, she will once again be leaving Necessity—and taking his heart with her, this time for good.

Maybe she had misheard. After all, her attention had drifted away a little in the midst of a long list of small assets Uncle Gavin had left to friends. Not family, though—Clara and Gavin were each the only family the other had.

Her eyes had misted up a bit at that thought, until she was jerked out of her thoughts by the sound of her name and something that sounded suspiciously like a business name with “oil and gas” in it.

Clara stared at the attorney sitting behind a desk at the front of the room, and had to remind herself to close her mouth before she spoke up to interrupt the older man’s reading of the will, waving her hand in the air a little to catch his attention. “I’m sorry, Mr. Pritchard. Could you back up a little?”

He blinked at her from behind rounded glasses. “Certainly, Ms. Graves. What part should I repeat?” Clara had known John Pritchard for most of her life, and even when she was a child, he had called her “Ms. Graves,” as if she were as important as the adult clients of his law firm. She had adored him for that. But at the moment, she wished he were less courtly, and more direct.

“The part where it sounds like you said Uncle Gavin left me some kind of oil company.”

“Ah. Yes.” Mr. Pritchard pushed those glasses up on his nose, scanning the papers in front of him, then read the passage again. It said something about the company and its holdings and rights and some other things that didn’t quite make sense to Clara about the company’s vitality and viability and conferring with the company’s current foreman.

“Just to clarify: that means that Aerio Oil and Gas, LLC, belongs entirely to me?” She tried to keep her voice from squeaking, but she didn’t entirely succeed.

“We can discuss it in detail momentarily, but almost, yes,” the attorney replied. He raised an eyebrow at her, as if making certain she was ready for him to keep reading.

Almost? What did that mean?

Slumping back into her chair with a surprised whoosh, Clara nodded and waved her hand again, this time motioning Mr. Pritchard to keep reading.

An oil company? What had Uncle Gavin been thinking? When had he acquired an oil company? More to the point, why hadn’t he told Clara about it?

She listened with only half her attention as Mr. Pritchard finished out the reading of the will.

The rest of it was pretty simple. With the exception of a few mementos and monetary gifts left to people like the woman who had cleaned his house every week for as long as Clara could remember, Gavin Graves had left everything to Clara. Much of it was specified in the will—the house and all its contents other than those otherwise disposed by the will, an old Mustang he had restored years before, a new Dodge pickup truck, and several bank accounts—but the document also closed by noting that everything not otherwise mentioned went to Clara.

“Thank you all for coming,” Mr. Pritchard said, standing. “In the next few days, I will be contacting those of you to whom Mr. Graves bequeathed personal gifts.”

Clara kept her seat as several townspeople came to offer their condolences, some for the second or third time that day. A cynical part of her couldn’t help but wonder how many of them were more interested in getting a better look at her after ten years in order to add fuel to the gossip fire than their sincere expressions and kind words might otherwise suggest.

That’s not fair, Clara. She could almost hear her uncle’s kind voice chiding her.

With a sigh, she finally stood up. “Tell me more about this oil company, Mr. Pritchard?”

The attorney nodded. “Of course. But really, Mac will be able to tell you more.” He gestured behind her.

When she turned to look, though, all she caught was a bare glimpse of a dark-haired man in jeans and a cowboy hat as he shut the door behind him.

For more about Margo and her books, you can find her at:

For updates about publications, free fiction, and other goodies, be sure to subscribe to her newsletter: https://confirmsubscription.com/h/d/03A21E5E161401F0