We took a boat ride over to Grand Island, now the property of the Forestry Commission and designated a National Recreation area. A three hour bus tour proved very informative on both the history of the island and its geology. Grand Island is built on sandstone and, depending on the age of the sandstone, each layer has a different color as it gleans more minerals from the earth around it. One variety is brownstone from which many buildings, particularly on the east coast, are built. Eventually, sandstone turns to limestone, a far more dense sedimentary stone.

But here on Grand Island, as we viewed one of the original cottages and saw the sandstone used for its chimney, the layers became evident, a color wheel of various shades.

graffiti left by early residents of the cabin, discovered as renovators peeled back layers of wall

Later on that tour, we visited a spot where two islands became the one. An area called a tombolo connects the two original islands having built up layers of sediment over thousands of years. The bottom layer would be coarse sand built upon by the waves rolling in and depositing more and more sand until the land bridge

between the two islands became permanent. Eventually, a thin layer of plant life developed, no doubt helping to bind the final layer.

Finally, of course, there have been layers of people, if you’ll excuse my stretching this metaphor. Evidence on the island shows inhabitants going back to 2000 BC.

Coming slightly forward, the Ojibwe/Chippewa nation used the island, ultimately welcoming fur traders in the early 1800s. Fur traders gave way to loggers before the next layer in the late 1800s—wealthy tourists who stayed at a full service hotel or built summer cottages on the shore. WWII put an end to this golden era and the loggers came back, selling out to the forestry commission, who have it now. 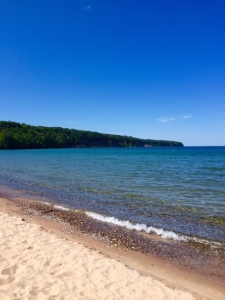