Well, that got your attention.  But Intercourse is a town, an Amish one at that.  It’s difficult to sum up what it’s like to visit a sect of people just to see the way they live, a Disneyland of sorts, or a film set, complete with costumes and horse drawn buggies.  The beautifully kept farms and homes give way to a sad display of crafts now catering mostly to tourists:  woodwork and quilting plus the understandable farm goods.  You do end up feeling like a voyeur, while non-Amish locals tend to the passing trade by selling ‘Whoopie Pies’ in Intercourse.

Far more interesting was Valley Forge.  Temperatures in the 90s did not dull my sense of history, further enhanced by storytellers Phil

and Claire, as well as tour guide Doug, who brought to life what it was like to survive the encampment at Valley Forge.  Our intended 4 mile hike out the window due to the heat, we took a trolley ride which included Washington’s Headquarters.  My sense of history, of the men who fought for the liberties we enjoy today, is most likely met by those  who continue to fight for our liberty and are camped at Valley Forge prior to their time in Iraq. 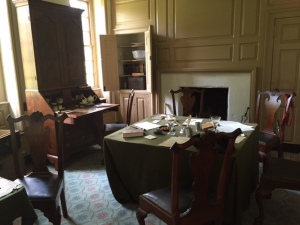 This entry was posted in Uncategorized. Bookmark the permalink.

6 responses to “Voyeurism in Intercourse”