There are many artists known for their paintings of the West, but the one whose work enthralls me the most is George Catlin.  Working somewhat in the ‘naive’  style, Catlin’s life work was to capture the American Indian before they vanished, and this he did:  his subjects came from over fifty nations.

Born in 1796 in Wilkes-Barre, Pennsylvania, later moving to upstate New York, Catlin’s fascination with American Indians started at an early age. His mother had regaled him with her tales of being a captive of the Iroquois during the Revolutionary War, and his cheek bore a scar from a ‘tomahawk’ thrown in a childhood game. 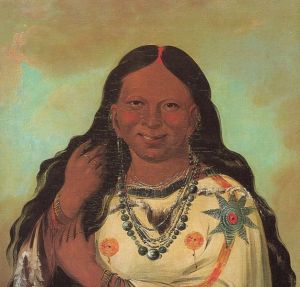 An encounter in 1805 with an Oneida may also have influenced him.   Although he initially studied law, Catlin was accepted by the Philadelphia Academy of Fine Arts and started his career as a portraitist. Successful enough to be commissioned by clients such as Sam Houston and Dolly Madison, Catlin spent time in Philadelphia’s museums painting tribal costumes, weapons and ornaments brought back by Lewis and Clark. When a delegation of Native Americans came to Philadelphia in full regalia, his ambition took root.

Catlin began by painting people from the various tribes in upstate New York. His empathy for the Indians is obvious in his work, portraying them as individuals rather than savages—the general concept of the day. Catlin foresaw that they would soon be wiped from the earth by diseases such as small pox, and ills such as whiskey. When the Indian Removal Act of 1830 forced tribes of the southeast on the notorious Trail of Tears, Catlin decided—despite being recently married—to venture west.

Armed with letters of introduction as well as some of his earlier work, Catlin called upon William Clark in St. Louis. Clark was then Governor of Missouri Territory as well as Indian Agent for the Territory of the Upper Louisiana, the latter position giving him full authority over all Indian matters in the West. Clark let Catlin set up his easel in his office where he painted visiting Native Americans there to trade or for treaty matters. 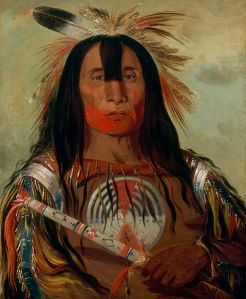 Subsequently, he and Clark became close friends, and Clark took Catlin up the Mississippi to a council with Sauks and Foxes, and again up the Missouri and overland to Kansas. Clark also posed for a full length portrait.

During six years from 1830 to 1836 Catlin traveled throughout the west, returning to his family for the winter. He painted warriors and women at work, villages, buffalo hunts, ceremonies and the scenery of the west, as well as everyday implements the Indians used. So many  purportedly wanted their likenesses drawn, it was often necessary for Catlin to develop a shorthand of sketching and filling in later. In addition to painting the Plains Indians, he made trips up the Arkansas and Red Rivers, and into Florida and the Great Lakes.

Catlin was determined that the world should see the American Indian through his paintings and, to this end, he started a series of exhibitions and lectures, including not only the paintings but artifacts and costumes he had collected as well. ‘Catlin’s Indian Gallery,’ as it was called, was largely successful and motivated him to approach Congress with the idea the collection should be bought as the basis for a museum. Despite the support of Daniel Webster, Henry Clay and William Seward, the resolution got no further than the House of Representatives.

This apparent failure prompted him to take the collection to London. There he received such popular support he remained for five years, the exhibitions evolving over time into a sort of Wild West show. This eventually went on to Paris where he was befriended by King Louis Phillipe and the paintings were exhibited in the Louvre.

However, when revolutionaries overthrew the King, Catlin was forced to return to England. Bankrupt and surrounded by creditors, he was bailed out by one Joseph Harrison of Philadelphia, who took possession of all the works.

By 1852, with his wife deceased and his children sent back to America, Catlin was persuaded by a Parisian acquaintance to go to Brazil in search of gold. He found no gold but proceeded to paint the indigenous peoples of South America over the next five years.   He later made trips to Alaska and up the Columbia and Snake Rivers, crossing the Rockies and canoeing down the Rio Grande.

In 1870, Catlin returned to the United States. He had a collection of copies of his original works, which he now called a Cartoon Collection, as well as an historical 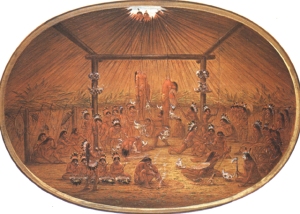 series he had done for Louis Phillipe. With the Indian Wars now raging in the west, Catlin received an invitation from the Smithsonian Institution to exhibit . Catlin saw this as his last chance to persuade the government to take possession of this pictorial record of a peoples and life that would soon vanish. But in 1872 Congress was more concerned with defeating the Indians rather than gaining pictures of them, and George Catlin passed away in October of that year, his life’s work packed away .

In 1879, the heirs of Joseph Harrison donated the original Catlin gallery to the government. Moth-eaten and with smoke and water damage, the Smithsonian restored them, finally putting them on show for seven years from 1883. In 1912, one of Catlin’s surviving daughters sold the cartoon collection to the American Museum of Natural History while others were in the collection of Paul Mellon, who donated them to the National Gallery of Art.

While Catlin’s work may not be regarded as great as a Remington or Russell, for me, the palette, the vitality of the paintings and the sincerity of the portraits is more enthralling than either artist. 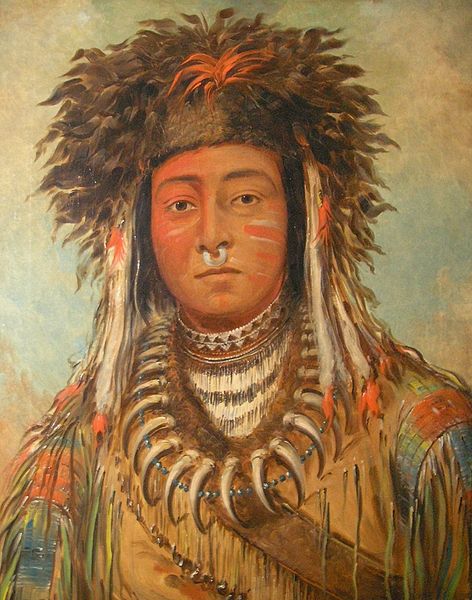 All photographs of paintings are public domain.