Destiny’s Manifest – What the Pioneers Packed for the Emigrant Trails

LaDene Morton and I first met at the Women Writing the West Conference in 2012.  LaDene, who writes both fiction and non-fiction, served this year as VP Conference for WWW in her home town of Kansas City, MO—a place of particular interest in her writing, which centers on the American West. Her historical fiction, What Lies West, was a 2010 Finalist in the WWW WILLA competition.  After reading and thoroughly enjoying the book, I asked LaDene if she would share some of the huge amount of research

materials she found concerning what it was like to cross that great unknown prairie of the mid-1800s, starting out from Missouri.  I’m delighted she agreed.

When I was invited to do this guest blog, I had no idea how much I would enjoy revisiting an earlier research project.  Andi has asked me to share some of what I’ve learned about the mechanics of preparing to travel the Overland Trails, discovered during research for my 2010 novel, What Lies West. I assume that’s something that clicked in her imagination when she read the book. It certainly did click with me, and I was more than happy to return to those travels – mine as I researched, and my characters’ as they set out west.

The novel begins in 1850 with a young widow seizing  an opportunity to travel west with a wagon company. Lina Clark, my protagonist, had a strategic advantage over others she would join on the trip – she had experience as an outfitter – and so she would know better than most what would be needed. Here, some level of detail was required. So Lina – and I – needed a shopping list. Easy enough, for there’s no end of scholarly research and primary sources that provide similar information to form what would be reasonable cargo. Two notable travel guides of the day remain in print, first and most infamously the 1845 Hastings Guide[1] and, later, Captain Marcy’s The Prairie Traveler[2].

The books included information on what to take, what the general threats and conditions were like (like a good travel brochure, generously accurate), descriptions of the terrain they would cross (also a bit rosy hued), and the routes to take.

About those routes – it was the Hastings’ guide that the Donner Party took with them, which led them – among other unwise decisions – to choose the not-coincidentally named Hastings Cutoff. After that, the War Department, eager not to have all its efforts to recruit settlers end in similar tragedy, commissioned Captain Randolph Marcy to write The Prairie Traveler in 1859, which became the preferred guidebook.

The modern reader would certainly find it hard to glean the useful information from these books. Accustomed as we are to graphs, charts and other visual displays of information, these books are densely worded narratives. But it was the written language of the day, after all, and literacy was relatively high back then, particularly in the eastern states where the opportunities for recruitment were rich.  Even if they could read it, it’s doubtful many did, or not thoroughly. The spirit of adventure that many sought – particularly the gold rushers and speculators – made over preparation anathema. They had manifest destiny. What more did they need, right?

Actually, they needed less. For the record, here is a summary list of what those books advise bringing:

That’s it. That’s all one could take – and even that might not be the right mix, depending on the trials of each wagon that made the trip. Everyone’s heard stories about wagons having to jettison cargo that should never have been loaded. Pianos, cast iron stoves, walnut bed frames and grandfather clocks are among the more illogical choices that came back to me as I re-traveled this road for this piece. History gathered these sightings of these relics in the journals of those who passed them. They wrote of them as fretful, foreboding totems along the trail. 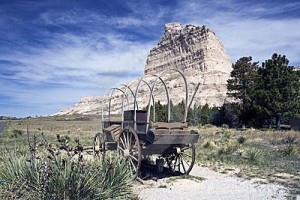 But that list is about more than what to take. It’s about what you can make from what you have.  The awl and buckskin turned saddle leather into shoes. The needle and thread mended and crafted scraps into quilts. Wagons were turned into rafts with a good slather of tar in the box. Broken bits of wagon carriage were carved into other useful tools.

I’ve often thought of the loneliness of those cast off bits of a life left behind as lonely sentinels along the trail. But after revisiting this, I see them now, too, as the natural castings of life. Most of life molts or sheds or breaks from a carapace to grow.  Maybe, after all, those cast offs weren’t just sentinels of despair along the road, but milestones, too – milestones that marked the sacrifices they were willing to make to start that new life.

[2] Marcy, Randolph B. (Captain, US Army), The Prairie Traveler

LaDene is currently revamping her website, but she can be reached at ladmorton@aol.com.  She has  very generously agreed to send a copy of What Lies West to Irene Bennett Brown.  Our thanks to all who left comments.

What Lies West is set in the mid-nineteenth-century American frontier, where everyone is headed out in pursuit of a dream. Carolina Clark, the young widow of a ne’er-do-well overland trader, can’t afford to dream, thanks to the bankrupt business her late husband has left her. With no prospects, Lina is goaded into traveling west as well, with two unexpected partners, one a would-be madam, the other a want-to-be cavalryman. In the long journey west and the life she pieces together there, Lina slowly discovers that within her lies her own dream, a dream she never saw coming.

This entry was posted in 19th C., Historical Novels, History of the West, Literature of the West, Women writers and tagged Capt. Randolph B. Marcy, Hastings Cutoff, LaDene Morton, Lansford W. Hastings, Missouri History, the Donner Party, The Emigrants' Guide to Oregon and California, the Overland Trails, The Prairie Traveler, What Lies West. Bookmark the permalink.