Back in January I had the good fortune to be traveling in Colombia. I found myself up in coffee country at the time of a festival in Manizales and this, to my great interest, included a type of bull fight called a rejoneo.  In rejoneo, the matador, now called a rejoneador, is on horseback and it is his skill as a horseman that is the better part of the performance.  One of the finest exponents of this sport, Pablo Hermoso de Mendoza, was in Manizales; he travels with a stable of 9 horses, several of which got a chance to strut their stuff in the course of the corrida.  While I never learned the breed of horse he employs in these events, they looked very similar to the Lippizaner of the Spanish Riding School , but perhaps more compact and muscular and, indeed, they do very similar haute dressage steps.  They danced in place, pirouetted in the face of a charging bull and quick stepped sideways out of the way with a grace that makes quarter horses look plain clumsy (please take a moment to watch Pablo in action here).  Four horses are used, each with a different specialty for the four stages of the fight—sort of like switching from your roping horse to your cutting horse. And the rejoneador will have the help in the ring of a toreador on foot to distract the bull when needed.

The entire performance was quite a spectacle.  It started with a parade around the ring, the rejoneadors dressed appropriately in eye-catching costume.  Hermoso de Mendoza sports the usanza española, a conservative outfit of short jacket, waistcoat, brown leather chaps and broad flat-brimmed hat.  One of the other rejoneadors, the older Antonio Ribeiro Telles, wore the more flamboyant Portuguese suit which looks like something out of the 1700s with its long, brightly colored and embroidered jacket, white breeches and tricorn hat.

Example of the Portuguese costume

The audience around me was no less ostentatious.  While the men were for the most part comfortably dressed for a day in the sun watching sport, the women put on a fashion show of eye-catching jewelry, fancy tops over tight pants (including one young lady wearing a backless leather number) and 6 inch heels.  Between each session food and booze was passed around in happy abandon, despite the fact we had just witnessed the bloody slaughter of a bull.

The rejoneo apparently started in Spain and Portugal as training to fight the Moors.  After the expulsion of the Moors, their noblemen began lancing bulls for sport although the Spanish eventually stopped the practice.  The bulls used nowadays are fairly slight, weighing in at around 1200 lbs. in order to be fleet of foot.  They have charming names like Flower and Pickle, but I don’t think that makes them any less deadly.  The spectacle is being enhanced in the 21st century by various new fangled ideas.  For instance, the rejon de castigo, or punishing lance, which is used to start off the proceedings, reveals a flag when it punctures the bull.  One of the rejoneadors, young Willy Rodriguez, had replaced the flag with an ‘explosion’ of sparkles

an explosion of sparkles

which delighted the crowd. But, nonetheless, with all of this show I had to ask myself where is the excitement?  There’s grace and beauty in the horsemanship, that’s for sure, but watching bulls get methodically slaughtered and hence vomiting blood is not the most pleasant pastime I’ve ever encountered.

Back in New York 6 days later, things were a bit more high tech over at Madison Square Garden where I moseyed on down to catch the last day of the PBR.  With flashing bright strobe lights and the initials PBR bursting into flames, 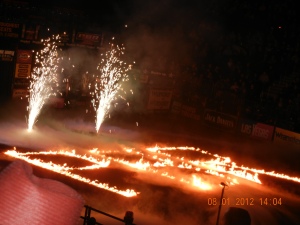 twenty competitors swaggered out into spotlights. Professional bull riding is billed as America’s toughest sport and it is also the fastest growing.  While the common sense of time and humanity has influenced the men to wear protective vests, ‘crashes’ and injuries to the riders are common.   Basically the men are wearing traditional cowboy gear:  boots, hats, chaps and leather gloves. Occasionally a man will trade his Stetson for a helmet with face guard but other competitors feel this weight unbalances them.

And we’re now dealing with a different kind of bull; these creatures are 1800 lbs and over and specially bred for their overall agility and strength.  Their names reflect this: no Pickles or Flowers here.  The day I attended, I witnessed Back Bender, Bad Blake and Angry Cactus attempt to murder a few men.

Sitting inside on comfy cushioned seats rather than the traditional rodeo arena bleachers, we munched American fare of popcorn, hot dogs and soft drinks.  I was surrounded by just about every homesick westerner and Brazilian who happened to be in NYC that day—all of us wearing our western gear. It’s sadly true that the only horse around was the one the roper rode; he’s the guy who’s at the ready to throw a noose around the bull if the animal really gets out of hand.  And of course there are the bullfighters, commonly called rodeo clowns, who distract the bull so that the competitor can make his way to safety.

Bull riding is a distant cousin of the rejoneo.  It purportedly began in Mexico where haciendas would have contests of riding and ranching skills known as charreada.  One of the contests devolved from bull fighting had the bulls ridden to death.  I don’t think even Ty Murray, ‘King of the Cowboys,’ would be capable of that these days!  In any event, this sport went through several permutations—riding the bull until it stopped bucking, then just riding steers, and so on—as it made its way up into Texas and then on to the rodeos of the old west. Eventually, in 1994, the PBR was formed to handle bull riding as a separate entity from rodeo.

So is bull riding exciting?  Is it a pleasant pastime?  I don’t think “pleasant” is the word to use here, but “exciting,” yes.  As long as you don’t move your eyes from the chute you’ll have plenty of excitement watching the most dangerous 8 seconds in sport. This is an activity that requires stamina, strength, and courage—this is NOT about ‘just hanging on.’ But what should one feel about the fact that it is now men getting hurt rather than the bulls? Most of these guys have had so many breaks to their poor bodies they’re virtually bionic.  And yet they come back for more—their choice!  Poor ol’ Flower and Pickles were led out like lambs to the slaughter, provoked and then killed.

It’s a tough old world out there and it makes me feel we haven’t come far from watching gladiators in the arena.

15 responses to “MEN, HORSES AND BULLS”