The Coffee That Won the West

A few months back I was deeply engrossed in reading a number of cowboy memoirs of the late 19th and early 20th centuries, doing research for the historical western romance I was writing.  I was amused to discover the number of everyday products the men mentioned consistently, some of which have now gone from the shelves.  There was Sapolio soap powder, Eagle Brand milk (still going strong) and, as any western historian will know, Arbuckles’ for coffee.  Ike Blasingame, in his Dakota Cowboy, (University of Nebraska Press, 1958)  gives Arbuckles’ more than a passing mention; he describes the chuck wagon and “A flat-sided coffee grinder was bolted to the side of the wagon, handy to reach, for in those days our coffee was made from freshly ground coffee beans.  Most all outfits used the famous Arbuckle brand.  It came in huge burlap bags holding one hundred one-pound packages of whole beans which were ground in the mill as needed.  I remember the stick of candy in each package, as well as a coupon, good for dozens of premiums—handkerchiefs, lace curtains, shears, Torrey razors, and jewelry of all descriptions, including wedding rings.”

Having read about Arbuckles’ so often, I decided to try to discover a little bit more about the “Coffee That Won the West” and see what had become of it.

Right up through the Civil War, coffee was primarily sold ‘green’ and had to be roasted by the consumer.  This was done in a skillet over the campfire on the range or in a wood burning stove at home, and it had to be done in small batches:  while green coffee beans could be stored indefinitely, roasted beans were subject to oxidation, leaving the beans rancid within a couple of weeks.  Furthermore, such individual roasting made for inconsistency, and one burnt bean could ruin an entire batch. Beans sold by grocers pre-roasted were subject to not only this inconsistency but also to mixed quality and to the vagaries of the grocers’ scales.

The family grocery business of Arbuckles’ was established in Pittsburgh in 1859.  John Arbuckle dropped out of college to join the firm, which included his brother Charles, in 1865, and his first innovation was to pack roasted coffee beans in 1-lb. packages, ready for the customer.  In 1871 the Arbuckles Bros. Co. was formed and moved to New York.  John Arbuckle then went on to invent an egg and sugar glaze that “closes the pores of the coffee, and thereby all the original strength and aroma are retained.” (from the back of an Arbuckles’ trade card, circa 1890s). Packed in l lb. packages, the coffee was an instant hit and Arbuckles’ Ariosa Coffee was born.  By the 1880s, Arbuckles’ was the largest coffee importer in the world.

Part of their success was due to their marketing innovations.  The bags of coffee were packed in sturdy crates, which eventually found their use in grocery store shelving and other impromptu uses such as repairing homes for the Navajo in AZ.  Now collectible, one crate that survived intact recently sold at auction for $300.  The bags themselves had an attractive, bright red and yellow label and contained a peppermint stick; this proved to be a means by which Cookie could bribe cowboys to grind the beans.  Arbuckles’ was also the first, in 1873, to advertise coffee on a full color handbill.  And best promotions of all were the coupons, as Ike Blasingame mentions above, along with trade cards.  The trade cards were works of art in themselves, and the different series included all the US states, countries of the world, humorous sketches, patriotic scenes, and maps. 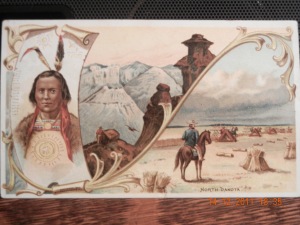 The reverse side could be anything from an ordinary postcard backing to advertising slogans, recipes or a picture of the factory as above.  Now collectors’ items, they are often available on eBay, and a cookbook of the recipes has also been released.

While the Arbuckle Bros. diversified into other areas of commerce, including sugar refining, and owned a ranch in WY as well, it was as coffee magnates that they were primarily known.  When 20th Century improvements in packaging made the glazing of beans unnecessary, the company continued to blend premium coffees.  John Arbuckle developed a ‘Yuletide’ blend that was eventually marketed as Yuban, now owned by Kraft Foods.  Sometime after John Arbuckle’s passing in 1912, the company was sold on to C.W. Post of cereal fame, eventually becoming part of General Foods.

But the Arbuckles’ story doesn’t end there.  In 1974, Pat and Denney Willis decided to start a company in order to provide their restaurants with coffee of a consistently good quality.  They took on a salesman named Ken Arbuckle who claimed to be descended from the Arbuckle Brothers—and so Arbuckles’ Ariosa Coffee was resurrected.  Now located in Tucson, it still comes with a peppermint stick inside the bright red and yellow 1 lb. packages, and cowboys today can still say ‘they ain’t worth shootin’ ‘til they’ve had their Arbuckles’.

My sincere thanks to Denney Willis for help with the information contained in this article and, most especially, for agreeing to donate a bag of Arbuckles’ to one lucky person who leaves a comment below, to be randomly selected by him on Jan. 20th.  For those of you not lucky enough to win but who would like to try The Coffee That Won the West, you can go to the Arbuckles’ website here  and brew up!

I’m pleased to announce the winner of the 1 lb. bag of Arbuckles’ is Sue Cauhape.  Congratulations Sue, and thanks to everyone who left a comment.

I’m further indebted to the University of Nebraska Press for their kind permission to use the above passage from Ike Blasingame’s Dakota Cowboy,1958.  Blasingame was the rough string rider, or bronc twister, for the British-owned Matador Cattle Co. when it moved from Texas to the Dakotas.  He describes his 8 years with them, from 1904-1912, in highly literate and perceptive language.  It’s a book anyone interested in the history of the Old West should read.  Available here.

24 responses to “The Coffee That Won the West”